Kia’s next-generation Soul EV for Europe has debuted at the Geneva Motor Show in the form of the e-Soul. 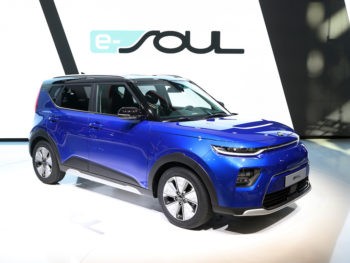 Now only available as an electric car, the third-generation model – part of the carmaker’s EV-only line-up at the show that also includes the Imagine concept – has been redesigned inside and out; all panels are new and it’s 55mm longer than the car it replaces with a longer (+30mm) wheelbase and a 15mm longer front overhang.

It gets a choice of two electric drivetrains; a long-range (64kWh) and a standard-range (39.2kWh) version, both of which feature electric motors up to 39% more powerful than before and fitted with Kia’s new-generation lithium-ion polymer battery packs.

The long-range 64 kWh battery pack is paired with a 204hp electric motor, enabling the Soul EV to travel up to 280 miles (452km) on a single charge on the WLTP cycle, according to Kia, while giving a 0-100kph time of 7.9 seconds.

The standard-range 39.2 kWh battery pack powers a 136hp electric motor and can travel up to 172 miles (277km) on a single charge under the official figures..

A Combined Charging System (CCS) DC fast charger is fitted as standard to both models, enabling shorter stops for charging. Both battery packs can be recharged from 20% up to 80% capacity in just 42 minutes from a 100 kW DC fast-charger.

The new e-Soul also becomes the first generation of the Soul to feature fully-independent multi-link rear suspension to provide a more responsive drive, and also debuts the brand’s new Uvo telematics system, which features live traffic information, weather forecasts, points of interest, and details of potential on- and off-street parking. It also shows drivers charging station locations, charger availability, and connection compatibility. The system can also be accessed via an app, bringing remote access to a range of vehicle functions.

The e-Soul goes on-sale across Europe towards the end of the first quarter of 2019. UK specification, on-sale date and pricing will be announced in due course.

At Geneva, Kia also revealed upgrades to the Niro Hybrid and Plug-in Hybrid, including a new exterior design, interior improvements and new colour customisation options. Both models also get the new Uvo system.

European sales of the upgraded Kia Niro Hybrid and Niro Plug-in Hybrid start during the second quarter of 2019.