Competitors in this year’s MPG Marathon are now under starter’s orders as they look to take the lead as the kings of eco-driving. 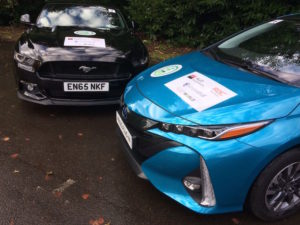 Entries in this year’s MPG Marathon include a pre-production Toyota Prius Plug-in Hybrid and a 5.0-litre Ford Mustang

Now underway at Heythrop Park, Oxfordshire, the MPG Marathon involves a 375-mile cross-country driving challenge, with drivers and vehicle manufacturers competing against each other.

With a record number of vehicle classes, this year’s event has attracted all manner of vehicles, including a Hydrogen fuel cell powered Hyundai ix35, a pre-production Toyota Prius Plug-in Hybrid and two thumping V8 engined brutes – a 5.0-litre Ford Mustang and a 6.2-litre Vauxhall Maloo.

The drivers will be battling head-to-head to maximise their fuel economy across the route, which they will plan themselves to take in various pre-determined waypoints in a bid to outdo each other in the fuel economy stakes. Part of the route will include a visit to Silverstone, the home of British Motor Sport, tomorrow (Wednesday 19 October). Prizes will be awarded in various categories for cars and commercial vehicles, with winners for both the best outright MPG and the best improvement over quoted figures.

Followers of the event will be able to track the teams’ progress live thanks to sponsor Crystal Ball’s on-board telematics. Visitors to the official website at http://thempgmarathon.co.uk/crystal-ball will be able to see exactly where the competing vehicles are, while the Crystal Ball system will also allow them to upload footage directly onto the site.

The event is also sponsored by ALD Automotive and RAC Business, and aims to highlight the benefits of fuel efficient driving to both individuals and fleet managers.

Event organiser Jerry Ramsdale said: “The sheer diversity of the vehicles taking part in this year’s MPG Marathon shows just how much benefit can be derived from fuel-efficient driving, and we’re excited to see what the drivers’ achievements will be.

“The MPG Marathon has grown to become a shop window into the world of both eco-friendly cars and eco-friendly driving techniques, and with the spectre of rising fuel prices and the potential for increased fleet management costs, the message couldn’t be more timely. Educating drivers in the art of fuel efficient driving has the potential to save fleets thousands of pounds.”

Brand new for 2016 will be ‘Garage 56’, named after the special place on the grid reserved for experimental vehicles at the famous Le Mans 24 Hour race. The category will be open to any vehicle that doesn’t fit in any of the event’s standard categories, including prototypes, concept cars, classic cars or tow vehicles, each of which will tell a story all of its own.

To follow live progress of the event, visit: http://thempgmarathon.co.uk/crystal-ball