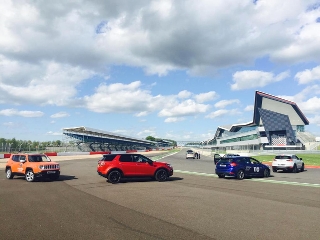 The event, which was sponsored by Barclaycard Fuel+ in association with TMC, was attended by a record audience of fleet decision-makers from across the UK, following record levels of pre-registered visitors.

They witnessed a stunning array of cars and vans available to drive on three different circuits of Silverstone’s world-famous Grand Prix track.

The Show also featured an extensive indoor exhibition of fleet service companies, a very well attended seminar programme, the Driver of the Year competition and an extensive fleet networking facility.

There was lavish praise from exhibitors at this year’s Show.

“We carried out some research by visiting last year’s Show and carefully selected the site for our stand as a result. We were delighted with the attendance at the event and saw a number of existing customers, plus some that we’d like to become clients over time. In all senses, we thought it was a very worthwhile event.”

Other exhibitors took to Twitter to express their reaction to the event.

Venson Automotive Solutions said: “We had a fantastic day at the Fleet show yesterday – lovely to see so many of you there. Bring on 2016 already!

Fleet Connexions ‏added: “Thanks to everyone who saw us at the Fleet Show. Hope you had as much fun as we did! We'll see you next year.”

Meanwhile UK Fuels tweeted: “Thank you @SilverstoneWing & @theFleetShow for an amazing show! Hope to see you again next year.”

And RAC Business ‏also added to the long list of tweets, saying: “Impressive sight @theFleetShow with motor manufacturers lined up in the sunshine at Silverstone.”

The event’s organizers were delighted with reaction to this year’s event from exhibitors and visitors alike.

Fleet Show director and publisher of Fleet World, Jerry Ramsdale, commented: “We are thrilled to hear that both exhibitors and visitors had a great day at this year’s Fleet Show.

“As ever with the event, it was our intention to provide an educational event that comprises fleet training, an exhibition, networking and test-driving to justify spending a whole day out of the office.

“The comments so far show that we’ve done just that. And now the work begins to make sure that the 2016 event is even bigger and better still.

“We have a provisional date already – Wednesday May 11 – and will be confirming it to all this year’s exhibitors and next year’s would be exhibitors as soon as possible.”