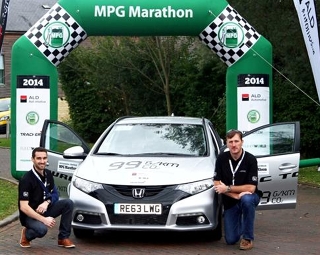 Now in its 15th year, the event is being sponsored for the first time by Barclaycard Fuel+ in association with TMC, and is being this year at the stunning Heythrop Park Hotel and the Heythrop Park Resort near Enstone in Oxfordshire.

Drivers currently putting their eco driving skills to the test include reigning champions, Fergal McGrath and James Warren, both Honda engineers, who will be fighting it out with the previous year’s winners, Nick Chapman and Rosemary Horner.

Other drivers include Ben Wilson, this year’s ‘Patrol of the Year’ from sponsor, RAC, who will be participating in the Mercedes Vito van that he uses every day in the course of his patrol duties. Meanwhile five sets of company car drivers are going head-to-head in the same BMW diesels to see who can complete the 300-mile course in the most fuel-efficient manner – and win the new title.

Electric and hybrid vehicle classes are again included, and they join the more familiar diesel and petrol engined cars and vans that traditionally take part in the event.

To catch up with all the latest MPG Marathon event news, visit: https://twitter.com/FleetworldMPG