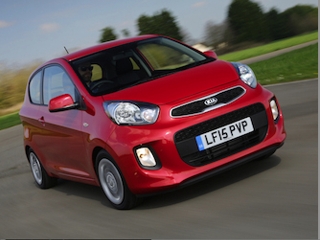 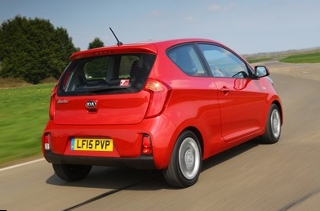 The latest model brings styling, re-engineering and specification revisions and a new trim grade, SR7, which replaces the former VR7 model and adds more equipment. A total of 11 models are available based on three-door 1 and SR7 grades and five-door 1, 1 Air, SR7, 2, 3 and 4 grades.

Interior changes see the addition of chrome and high-gloss black detailing while SR7 models now gain privacy glass and automatic lights. The five-door grade 4 version which sits at the top of the Picanto range gains cruise control with a speed limiter. Every model has an upgraded audio system with fewer buttons and faster responses.

Further versions featuring an audio-visual navigation system linked to a seven-inch screen will be added later in the year.

Entry-level kit includes a height-adjustable seat, a tilt-adjustable steering column and Motor-Driven Power Steering along with a standard RDS radio and CD player with MP3 compatibility and four speakers.

The Picanto will be available with two engines from the Kappa family which perfectly suit the trend for smaller-capacity power units with outstanding performance. Both conform to EU6 emissions regulations and will be fitted to vehicles built from June 2015, available for UK customers in the autumn.

The three-cylinder 1.0-litre unit delivers 68bhp, while the 1.25-litre four-cylinder version develops 84bhp and is available with either a five-speed manual or a four-speed automatic transmission, depending on model.

The 1.0-litre engine has combined fuel economy of 67.3mpg with CO2 emissions of 99g/km in standard form, improved to 68.9mpg and 95g/km of CO2 when allied to Kia's ISG engine stop/start system. 0-60mph acceleration time is 13.9 seconds, while the top speed is 95mph.