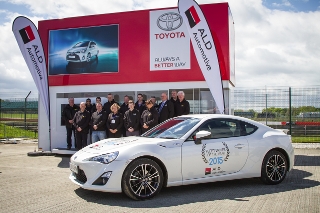 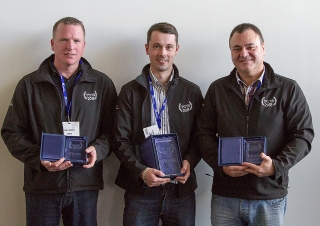 Crowned at Silverstone on 12th May, Mr Parry was joined on the podium by David Spruce of Neopost in second place and Andy Roberts of Univar, who came third.

This is the third year that the challenge to find the Fleet Driver of the Year has been held by ALD Automotive, in association with Fleet World magazine, and event partners AA DriveTech and Toyota & Lexus Fleet Services.

Commenting on his win, Mr Parry said: “I was really pleased but it was a complete shock. On the Finals Day I was paired up with David who came second and we both observed how it’s opened our eyes to driver safety, especially with the braking distances and how much more care we should take behind the wheel. The telematics monitoring also made me really aware of how I was driving on a day-to-day basis – I’ve become far more conscious of what I’m doing.”

And Mr Parry has already noticed the benefits, saying: “My fuel consumption has already improved dramatically. Driving to the Finals Day at Silverstone I was getting around 75mpg just by driving more carefully and being aware of what was going around me. Obviously this will benefit the company too.”

David Spruce, who came second in the event, also praised the event. Mr Spruce, who is the Enterprise Mail Business Manager – Neopost UK, said: “It was one of the best days I’ve ever had,” and jokingly added: “I wouldn’t want other drivers to do it as they’d be up against me and I’d have less chance of winning next year! But I would definitely recommend it to everyone as you can learn so much from it, both in what you’re capable of achieving and what modern driving safety technology can do for you. It was also great to get some recognition for my company that I’d done well.”

Commenting on FDOTY, David Yates, Marketing Director of ALD Automotive, said: “Congratulations to Stuart Parry for taking the Fleet Driver of the Year title after several months of hard work. I’d also like to thank all the drivers that took part in this year’s event, supported by their fleet managers.

“We were very impressed by the standard of driving this year, as demonstrated by the in-vehicle telematics monitoring, which saw very few drivers picking up events for issues that impacted on performance or safety, such as speeding. In addition, those drivers who did trigger events soon showed significant improvements in safety and fuel efficiency, underscoring the benefits of the technology.

“Whilst Fleet Driver of the Year has been designed to be fun for competitors, it also has a more serious message of the need for safer driving. It also shows the clear benefits of using technology, including telematics, to provide a valuable insight into driver behaviour, which can then be acted on through bespoke training as part of comprehensive road risk management policy.”