168-strong fleet of electric bikes to hit Edinburgh next spring

A fleet of 168 e-bikes will be launched in the Scottish capital next spring for full public use. 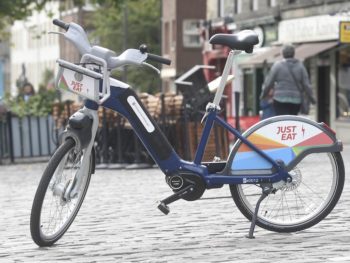 The e-bikes are similar to Edinburgh’s existing pedal bikes but have a slightly different frame, a new colour scheme and also feature a battery pack and motor designed by Continental

The e-bikes will be introduced to Edinburgh’s Just Eat Cycles hire scheme and provide constant electric assist with a maximum supported speed of 15mph. Once launched, they will be located throughout the city’s existing hire points and unlocked via the same app. Details of pricing rates are yet to be announced.

The bikes are currently being tested out by a series of partners across the capital, including Transport for Edinburgh, and The University of Edinburgh, to track user experience and journey patterns ahead of the public launch.

The e-bikes will also be available for public use at the next Open Streets event on Sunday 1 December at the Canongate between noon and 3pm and at other similar events through the autumn and winter.

George Lowder, Chief Executive of Transport for Edinburgh, said: “This is the first time in the UK that both pedal bikes and e-bikes have been integrated into the same city wide scheme and we anticipate that this will help encourage more people to take up cycling as a viable transport alternative.”